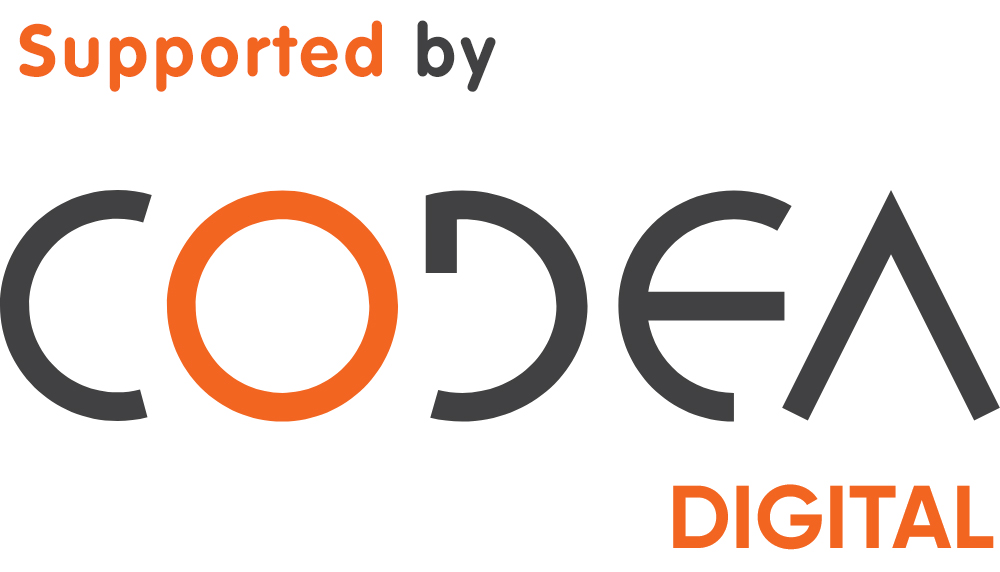 My name is Marine Andrew Grant.  From October 2008 until February 2009 I was serving with Yankee Coy of 45 Commando in Afghanistan.
Myself and my friend Marine Iain Syme were caught in an explosion on the 3rd February in the Upper Sangin Valley whilst on a foot patrol in the early hours of the morning. 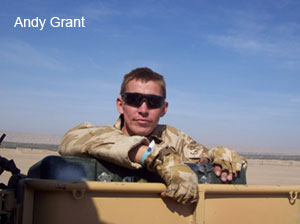 The Taliban had set up a trip wire daisy chain. It was attached to two 81mm mortars near an irrigation ditch. The threat before this had only been pressure plate IED's so there was no reason to think there would be any trip wires about.  Add that to the fact it was five in the morning, before first light, it was almost impossible to spot.

As Marine Syme jumped the ditch the device was triggered and two bangs went off in between us. The explosion had blown him into the field in front about 15 meters whilst knocking me back a few feet into the field to the rear.

The blast had left Iain with a broken femur, head injuries and a badly injured left arm, blowing his elbow joint away. Meanwhile I had suffered shrapnel wounds to all four limbs and my face but my worst injury was severing my femoral artery which left me bleeding to death.
Luckily enough the lads around us on the ground were up to the task of keeping us alive and securing the ground, enabling the MERT team to come and pick us up. The lads on the ground did a fantastic job treating me and Iain.  If it wasn't for their actions there might have been a different story!
Some 30- 40 minutes later I heard the Apache above and then the smoke being popped so I knew the MERT was here.  I can remember thinking thank F**k!

Once on the MERT I had lost about 5- 6 pints of blood and was going into shock.  The men and woman on the MERT had a tough task of making me stable, as well as Iain who because of a bad head injury had also gone into shock.

From this point on I can't remember a thing.  I was put into an induced coma and woke up 2 weeks later in Sellyoak Hospital in Birmingham. However I do know that once I arrived in Bastion, although I only spent 6- 7 hours there, I had two trips to the operating theatre where life saving surgery was performed. Also, because of my various injuries, I was in a really bad way but it was my right leg which took the brunt of the blast as not only had I severed my femoral artery I had also smashed both fibula and tibia and lost 6cm of bone. Not only had the surgeons done an outstanding job of keeping me alive, the fact that I still had my leg by the time I got to Birmingham was yet another miracle.

The pair of us spent our first 2 weeks at Sellyoak in the Critical Care Unit where even more operations were done. At first it looked like I was going to be losing my right leg but in the end the team managed to save it.  This was thanks to the work of the lads on the ground and the team at Bastion and those on the MERT whose efforts gave me that little bit more of a chance of keeping it.

In total Iain spent 2 months in hospital while I spent 3.  During this time the Surgeons, Doctors, Nursing staff, Welfare teams and everyone else not only helped us but also our families.

The treatment I received was second to none. There always seemed to be someone there to deal with whatever problem came up, such as medical issues or something as simple as someone just to talk to.  Both I and Iain made some great friends at Sellyoak and it's always great to go back and catch up with them.

After moving from Sellyoak we both moved on to Headley Court.  Neither of us had a clue what to expect and weren't quite sure what we would get out of this place, especially with my injuries.  I have a huge x-fix (lizaroff) frame on my leg so I was a bit dubious of what could be done.
How wrong I was. I have been at Headley now for over two months and the improvements that I and Iain have made are incredible and it is all thanks to all the staff at Headley.

The physios and RI's are great and it is them who are to thank for getting me up out of my wheel chair and now even weaning me off crutches.  Now I am proud to say I only have one walking stick.  This is thanks to the programme and time put in by the physios and RI's, plus their dedication to the men and woman who are injured.

If you have any issues there is always someone to help you deal with them.  Whether it is the Social Work Department, Occupation Therapy, Physiotherapists, wanting to do an education course or anything else - guaranteed there is someone here who can get things sorted.
The Welfare Department at Headley is also fantastic.  With the welfare staff always trying to get trips organized and days out and sporting events.  This is a massive help as times can be very frustrating being injured and not being able to do an awful lot about the situation you're in.  These trips help a lot to take your mind off things and it's also a great chance to meet other people and make new friends and see people who may have been in a similar position to yourself. 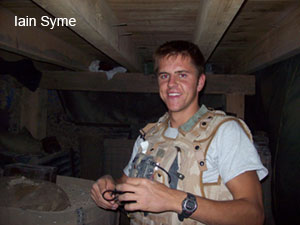 My family has also benefited from the various things both at Headley and Sellyoak.  When they come and visit there is a place called Norton House which lets the families come and stay.  It's a great place to stay for the weekend, or however long, and again the support for the families is just as good as it is for the ones who are injured.

I would like to say on behalf of myself and Iain, if it wasn't for the hundreds of peoples along the way, from the second we were injured to this day now, that have helped us and given their support and their time, then it wouldn't be possible for us to be where we are now.
I can't thank everyone enough, from the lads who patched us up on the ground to the medics on the MERT, in Camp Bastion, the flight on the way home and in Birmingham Hospital. There are just so many. Also, the growing support from public, local communities and everyone else who are now realizing about the injured men and women from operations.  The growing number of charities that are being set up are a massive help, as it is their funding which is helping numerous different things happen along the way.  There is a swimming pool in the pipe line for Headley Court and alot of the trips and events for the injured men and woman come from the fundraising done, not to mention the many other things that the money is spent on.

On behalf of myself and Iain I would like to say a huge thank you to everyone who has given their help and support along the way on our road to recovery.

If it wasn't for your efforts it wouldn't be possible for us, and so many others, to be able to carry on living our lives and getting on with things as normally as possible. Your efforts are definitely making a difference, so I thank you. 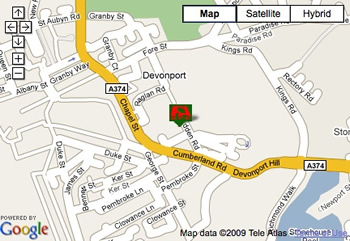 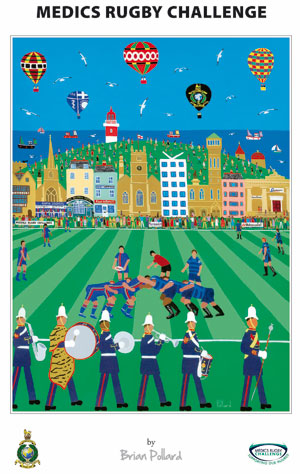